One of those small things I’ve been planning to do something about for a good while: the input amp of Jerry Springer, my DIY spring reverb unit.

It wasn’t long after I completed the build, that the amp board blew up on me. Since the original build also included a “Direct In” that bypasses the amp (via switching jack), I simply continued using the tank by feeding it directly from one of the outputs of my AD/DA converter (the Behringer ADA8000). Sure, the signal levels weren’t anything good but the setup worked.. 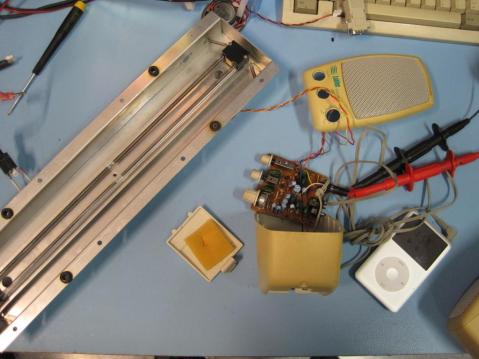 Recently though, I came across these cheap LM386 amplifier boards on DealExtreme and immediately connected it with reworking Jerry’s input amp. Things happened and so, we now get to this post :)

The output of Jerry’s existing PSU was within the required voltage range (5 – 12V), and thus hooking up the new amp didn’t require much modding. The input on the LM386 board has a 10K trimmer for dampening the signal, this I replaced with Jerry’s existing Input Gain potentiometer (conveniently 10K too). The part doubles up as the board mounting solution too. 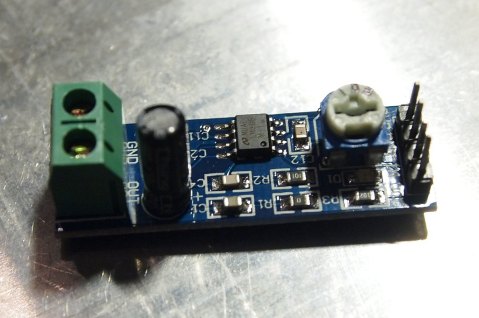 The new LM386 board in its stock configuration.

I also removed the on-board SMD LED, and connected the existing power indicator LED (on front panel) to its solder pads (yellow cable on pic below)..

And that’s all there was to it! I did order a second board for amplifying / buffering the output stage too, but since the signal levels improved enough with the input amp alone I didn’ t bother with it. 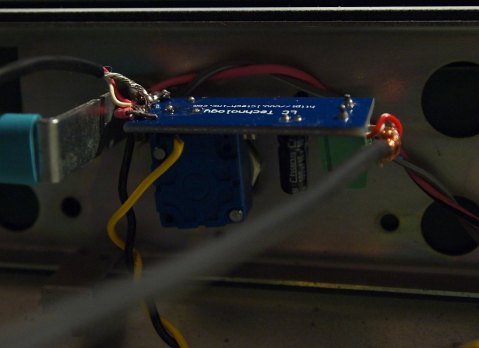 The LM386 board seems just too convenient a solution for wherever a small amp PCB is needed. Definitely getting more of them for those insta-kludging moments. In no way is making your own PCBs or breadboard circuit worth it, when you have this kind of cheap sub-modules around :)

Missed out on the original build posts of Jerry? Check them here: Part 1, Part 2, Part 3, Part 4.