This time around though I’m skipping the turkey in favor of adding LED lighting to thruster engines of Lego Star Wars Ultimate Collectors Set (UCS) nr. 75060 aka ‘Slave 1’.. Aka ‘that clothes iron looking spaceship’ with which Jango & Boba Fett transport their *preciousssss* bounty in in Star Wars movies.

I haven’t touched this topic much here on this blog, but I’ve been a Lego enthusiast since childhood. I’ve also done my share of model aircrafts and Warhammer 40k figure painting, modding etc. I love to tinker and the complex Lego factory kits like the UCS series fit well into the big picture.

I assume big part of why I still enjoy building these Lego kits attribute to the ‘smooth sailing’ feel of a turn-key project. Unlike the more ‘from the scratch’ types of DIY builds where you need to figure out schematics, source parts etc., every once in a while it’s nice & relaxing just to sit down, spend “quality time” with a straight-forward build and get it sorted! Add to that I totally love the mechanical and structural choices the modern Lego designers take in these kits :) 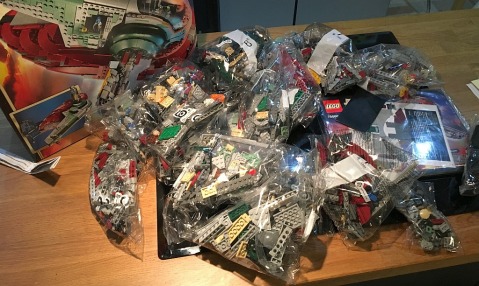 So yeah while this 75060 is not my first UCS kit, I’ve so far steered clear of LED modding probably mostly because I’ve been so excited to complete those builds! But for this kit I knew had no need to rush it and could dedicate a portion of each day over the whole extended christmas weekend. And so here we are!

The thruster engines in this kit consist of small and large blocks. Officially they probably go under some more techno-babbleish names too, but I’m too lazy to look them up. The small block is a single rounded bar containing nine 1-by-1 blue translucent round smooth tiles while the two large blocks are Lego Technic wheel rims with a blue translucent dish mounted on the inside. Maybe pictures do a better job than the above: 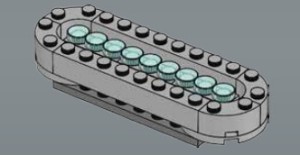 In overall the electronics design of this mod boils down to the basic recipe of battery + on/off power switch + LEDs + resistors to limit current for the LEDs.

It’s well ok to note that, while the instructions below definitely are NOT the only way to mod the thrusters, they are entirely based on parts which I had at hand at the time. Had I had some other set of parts, the mod would be equally different.  Say for instance, I used square 2*3*4mm LEDs (leftovers from my Arp 2600 clone build) but regular 3mm dome LEDs would’ve made far more sense. But regardless of details like this I think my design turned out pretty neat & clean-looking.

Where building a 75060 kit with this mod goes, you can safely build it up to parts bag 5 and then add the electronics. Bag 5 is the one that contains parts for both the thruster blocks and you definitely want to run the wiring before building the rest.

Ok so all the thruster blocks have a number of studs or through-holes that’s dividable by three: Small one has nine whereas both large ones have six. Because of this and the fact that I only had a 9V battery + terminal at hand, I decided to base my mod on a chain of three LEDs followed by a current limiting resistor of 470R..:

As thrusters studs / holes add up to 21 LEDs all in all (9+6+6), getting the electronics portion done requires making 7 pcs of the above LED chains, then hooking them up to the battery via a on/off switch.

Now then, let’s turn all this into a ready-to-use mod!

I found that the section inside the top / front piece (behind the large dish) made a very nice compartment for the 9V battery. It’s in fact so perfect that despite the battery is ‘loose’ inside, it doesn’t shake much with the cabling & dish installed.. And to replace, you only need to remove the large grey dish. With zero parts added or modded, I think it couldn’t get much more convenient than that!

9V battery compartment for my Slave 1. Large grey dish on the bottom / rear of ship serves as the lid.

For the power switch I had this sub-sub-mini-mini-miniature toggle switch which fit nicely inside one of the compartments to the sides of top / front piece. I chose to use the one to the left (bottom side):

My chosen ower switch position at the back (= the curved piece) ..

.. battery terminal wired through the frame, with a knot for cable tension relief.

Then heat up the iron and solder positive battery cable (red) to switch .. 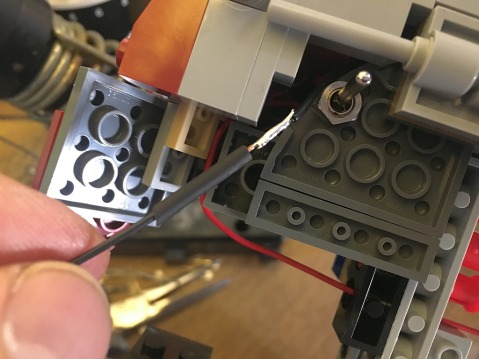 .. then extend the negative battery cable (black) and cover the solder joint with heat shrink tubing .. 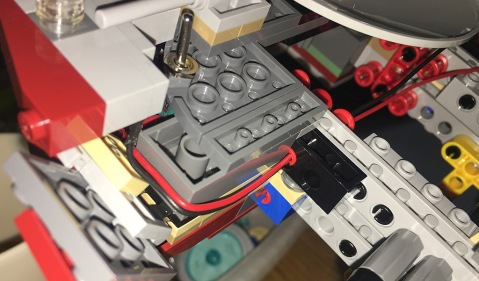 ..and finally, run the cabling through the frame!

For the small thruster block I chose to drill through holes for each of the LEDs and wire them together on the underside. For the wiring to work out, this approach required moving the two 1*4 stud pieces (used to fasten the thruster block in the original design) to top of the block and adding a couple of the extra 1*1 stud pieces to the bottom. 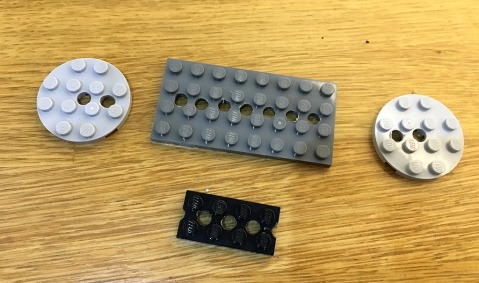 Base pieces need a bit of drilling ..

.. whereas the parts that sit on top need slots filed on the sides. 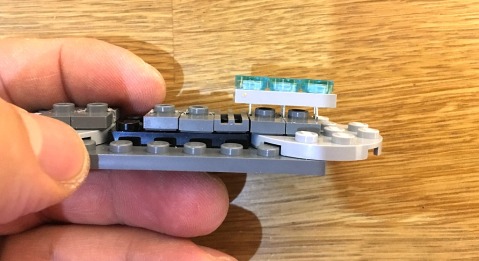 Missing from the above is one photo I forgot to take, which shows drilling the 1*3 grey tiles the translucent round ones are attached to. Anyway I’m sure you get the idea. Here the 3mm round dome LEDs would make a lot more sense than the rectangular ones I used. 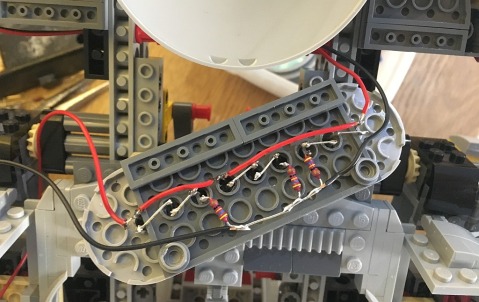 Solder connections for the small block. Also showing how to install the 1*4 and 1*1 pieces.

The installed small block viewed from top side. 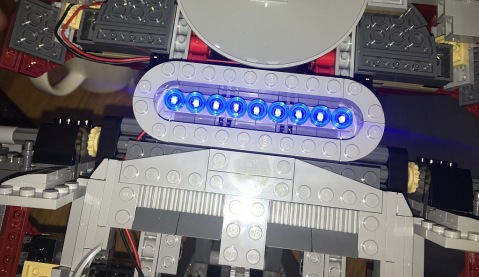 These two were nice in that there’s..

After testing various household materials for the latter I chose to go with baking paper. I cut four circular pieces per thruster block, using the dish as a drawing template.

In contrast to small thruster block the wheel rim holes of the large ones provide zero support for the LEDs. This makes soldering a lot more challenging, and with no rig I decided to use a folded up piece of tin foil under the parts to be soldered, so as not to melt any of the plastic rim underneath.

As for the LED position inside each hole, I found that aligning the bottom of the LED casing about half way inside hole resulted in the smoothest diffusion. You can still see the pointy spot light of the LED, but it’s not as far as bad as with the non-diffused small block. 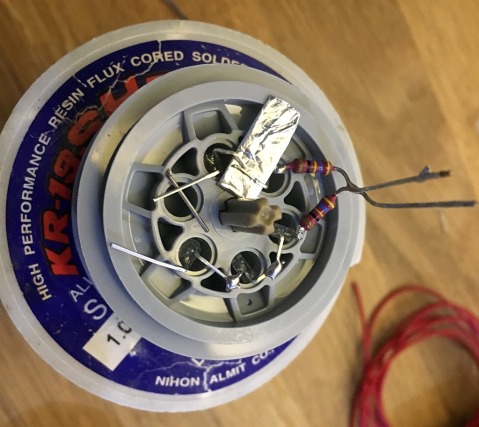 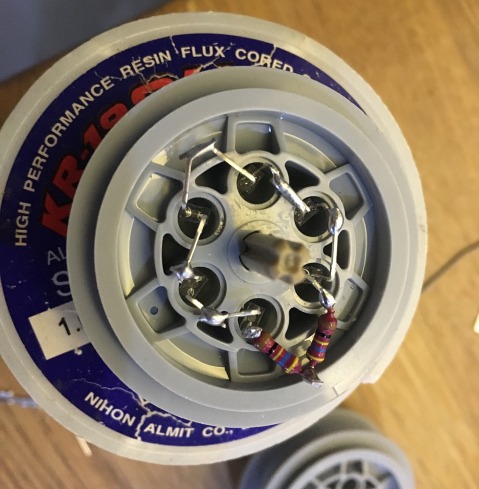 The complete solder connections of a large thruster.

Wiring from small block runs out and under the wing shaft ..

.. then connecting to left large thruster ..

.. and finally to the right thruster.

Install large thrusters & light it up!

Yayy and it’s all done. It’s 30 minutes to midnight where I’m at so if you’ll excuse me I’ll now go party. Have a happy new year! =)