In for repairs early june, a couple of HTC phones with their USB connectors in need of replacement. The other one a TyTN and the other one a Touch Dual, both using a proprietary HTC connector. Just take a wild guess which was the most problematic bit of the repair.. Neat that I wasn’t the one who had to source the spares ;)

I’m moreover writing this post just to have the few silly bits of info logged up somewhere in case I need them later, not for the sake of documenting the actual repair (it’s only about swapping connectors anyway). In case you ended up here looking for additional info on this connector but happen to know something beyond what I’ve written, please add that to the comments. If you happen to know a any online shops that sells these connectors, that bit of info is much welcome.

The HTC proprietary USB connector (called ExtUSB) has 11 pins and is designed to be compatible with USB Mini-B connector whilst adding some features needed for mobile use. So, on the other side of the connector you have the standard USB contacts whereas on the opposite side there’s audio and mic signals. Check the exact pin specs f.ex. at Tracy & Matt if you need them.

HTC part numbers of the spares I got were 75H00743-00M for Touch Dual and 75H00465-00M for TyTN. The Touch Dual connector I got had it’s mounting support studs reversed but thanks to some clever designer at HTC, the PCB has solder pads on both sides of the board to cater for both connector types. Probably the neatest detail of board design I’ve seen in a while :)

What additional info I was able to dig up using the part numbers doesn’t really add up. According to one possible number reference these connectors could’ve been manufactured by ACT Electronics (whom have apparently gotten bought by Ayrshire Electronics). But why would a taiwanese company source parts from the U.S.? Surely they can buy these parts far more cheaper locally or from more nearby countries? Or just have some factory of their own, given that this connector seems to be in use on most of the HTC phones..  Oh well whatever the case, enough with all the lame “sherlocking”!

I have no idea if any parts retailers stock similar connectors, not that I was able to find any at least. The spares for this repair were sourced from a HTC repair center, with no other info available than the (aforementioned) part numbers. Without knowing the manufacturer (or their part number) for certain, I didn’t want to spend too much time with “lucky guess” web searches either. After all, spares were already on their way at this point. Few weeks later, I got to the actual repairs..

Just in case you’re wondering why the solder feet look so unaligned on the picture above, it’s because of the mirrored mounting stud configuration. Thanks to this, the solder pins had to be slightly bent in order to make contact with the pads on the opposite side of the PCB.

As for removing the old connectors, I chose the ‘gentle’ approach of “let’s cut it into bits and lift them away piece by piece“. Thanks to RF shielding requirements, mobile phones usually have large copper layers on the circuit board. Combine this with lead-free solder (requires higher temperature to reach liquid state), removing a connector can take a lot of heating in turn exposing the rest of the electronics to unnecessary thermal stress. So, cutting up the connector enclosure allows heat/desoldering to be focused on one single spot. This makes the removal easy, lessens the risk of board damage and speeds up the overall removal process.

The only thing you have to be careful during the cutting is to check that you don’t cause additional stress on the solder pads. The smallest of these could break off from the board f.ex. with careless prying. Especially the plastic bits housing the contact pins need special attention. 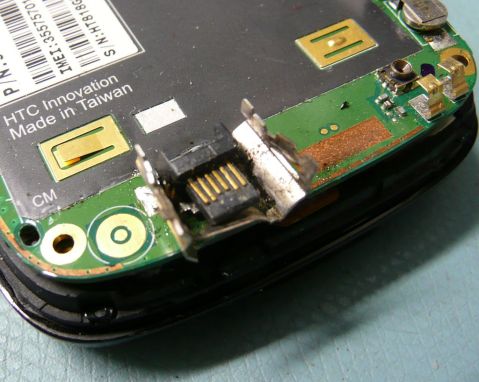 After the bits have been removed from the board, a cleanup is in place. Excess solder is first removed and flux / dirt remainders are cleaned away using some alcohol-based solvent (I used isopropylene alcohol). Cleaning up is important especially if you have only leaded solder, as mixing that with lead-free solder results with a mechanically weak joint that will break up very easily.

Soldering the new connector in place is best done under microscope. Undoubtedly this task could be performed without one as well, but it’s nice to have the “big view” confirmation that you haven’t actually left some miniscule solder bridges on-board. To evaluate replacement procedure between the two, the TyTN was far more easier to solder than the Touch Dual. Plenty of open space around the connector and all that..

Yep, guess that’s about it for this repair. Didn’t even find any “extra” screws on the desk after completion :)