Here’s one simple mod I’ve had on the to-do list for ages: swap the C64 audio/video connector to something that can take a regular s-video cable and use the RF modulator RCA jack for audio out. Standardish connectors just save from that much hassle.. Plus it’s also very hard to think of a use for the RF output these days :)

If you’re planning to perform a similar mod, a word of warning. Depending on the type of motherboard version, VIC-II chip and RF-modulator, stuff like pinouts and component reference numbers can vary. So instead of soldering stuff together according to my pictures, closely check the schematics which correspond with the C64 you have. Zimmers.net hosts a healthy amount of Commodore reference documents.

First up, the A/V-connector has to go. Obviously, the new S-video compliant connector won’t fit on the mainboard and so, some adapter board is needed. I decided to fashion mine out of a leftover piece of perfboard (9*9 holes). The connection points on the mainboard/connector match the standard 100-mil (2.54mm) spacing, and thus can be used to solder the new board in place. Won’t go further into construction details since I think the pictures describe enough.

The newer C64 A/V-connector pinout is (also check picture above):

My adapter board also has a series resistor to dampen the chroma signal and a jumper for (dis-)connecting the audio input. For the chroma resistor, a value of 330R is often suggested; I didn’t have one at hand so I used a recycled 470R trimmer dialed “about there”. 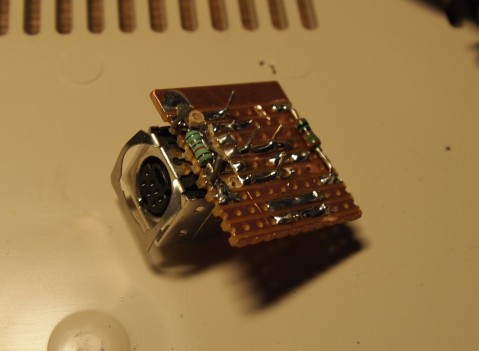 On this particular board, the resistors in the bottom do nothing else than raise the perfboard (and the connector) off the mainboard.

C64 enthusiasts say that disconnecting the RF sub-circuit improves picture quality. Given that it was so easy to perform (at least with the particular RF-module I have), who am I to argue.. Looking at the schematic of model #251696 modulator, +5V is fed through L10 whereas the junction of C5, R9 and R10 connects to R20 with a jumper link. So to disconnect the RF sub-circuit, I just lifted up the other end of L10 and the jumper link, and that’s it. Can’t tell if this improved the picture in any way: I have my C64 hooked to a LCD through a cheapo”‘S-video to VGA” -converter and that adds some artefacts of its own..

But whatever, way better picture than with RF or composite and that’s what matters :)

RF sub-circuit disconnected from +5V / composite video and audio out routed to RCA.

Besides the simple RF sub-circuit removal mentioned above there’s a slightly more complex mod by Zero-X / OMS called ‘Spider’. With this, parts are removed according to intended use:

..and just take a look at the picture quality esp. with model 6569 VIC-II. Pretty awesome! Zero-X also mentioned that one additional mod would be to clean up the VIC-II AEC signalling with something called the “AEC fix“. Apparently this signal adds some repeating vertical ghosts over the picture.

Yet another mod would be to remove the RF modulator altogether and make a separate amplifier board for the chroma/luma signals.