One last repair for the DG-20 before I can start considering breaking it in some other way! Any electronic instrument from the 80s is very much a excellent candidate for circuit-bending after all.. ;)

When I got it, the DG-20 had serious problems deciding whether a note was held on the fretboard or not. In closer inspection it turned out that a previous owner had attempted some kind of repairs on the fretboard. Like said, it’s too bad that this person had decided to remove the rubber mat by pulling it off from the fretboard instead of doing it properly, in turn tearing the mat into three slices. To illustrate the structure just for you (<3), I made the this fancy mspaint diagram:

So in its original configuration, the rubber mat attaches to the fretboard with the bits wrapping around the PCB edges. Once this combination is installed to the neck (double-sided tape and two screws used on the PCB), the mat will stay nicely put although it’s not actually fastened with anything else than surface contact.

The owners method of choice for “repairing” the mat after the unsuccessful removal was to glue the top slice of the mat over the fretboard. Problem here, the glue used was this plasticky-blob-once-dry type of stuff and once it settled the blobs ended up pushing the mat away from the PCB contact surfaces.. D’Oh! And to make it even more of a issue the glue had been applied along the width and length of the fretboard, zig-zagging from one edge to another. Ok-ish for attaching the mat but totally silly in terms of switch contact! :)

Fancy gluework son, did you do it all by yourself?

So yeah first up: glue removal. Here, the rubber mat was no problem. It’s hard to get nearly anything to grip properly with rubber and lucky for me, the plastic glue used was no exception. It simply flaked off when gently scraped with a fingernail.

The fretboard PCB on the other hand, a slightly bigger problem. As mechanical removal methods are called for, it’s really easy to end up damaging the conductive top layer bits of the fretboard. My method here was to scrape off the glue with a flat screwdriver that had a slightly smoothed / rounded tip. The idea was to at least try avoiding heavier scratches and cuts. Scraping was done very gently of course, with light/small movements and almost no pressure on the screwdriver. Once I had the parts cleaned, I spent a few days doing a few switch contact improvement tests for the rubber mat (easy test subject). More on those in a bit. 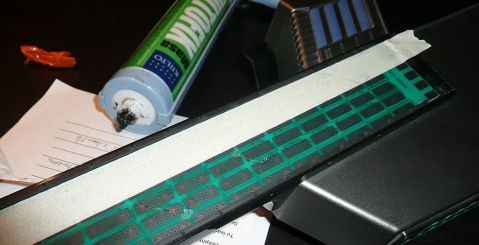 A strip of masking tape to protect the contact surface..

For piecing together the mat, my initial plan was to use some vulcanizing glue (à la bicycle tire repair kit). But, not having any at hand, I ended up using black acrylate sealant. This can withstand about 10% stretch once dried up (and is also weather/water-resistant) so I’m guessing it should work  just as fine (in the long run) as the vulcanizing glue, even despite the seams are more fragile. Silicone sealant would probably work equally well too.

I used strips of painter’s tape over the fretboard PCB (to protect the contact surfaces) and applied small amounts of sealant along the side pieces using a toothpick. After this I inserted the top piece, aligned the frets to match up with the sides and secured the whole thing in place with tape for the drying up period.

..and glue + "contact" piece insert and aligned from one edge. Painter's tape for drying support.

Once dried up, the fretboard had to be dismantled for tape removal. The seams did probably move more than the “10%” during the process, but the pieces held together. Switch contacts work fine too, so it’s a confirmed fix!

Besides the repairing the mat, I also wanted to test a few things to try improving conductivity. Due to the structure of the mat (six long conductive stripes), it is a pretty easy “practice piece” for paint masks and such. Whatever ideas or work methods I can pick up in the process should be applicable towards repairing anything that uses a similar technique (conductive rubber mat over PCB), eg. old game controllers.

First up, graphite spray. The stuff I’m using is ‘Graphit 33‘ by Kontakt-Chemie. No idea what it actually consists off (graphite, obviously), but it’s great for making this and that conductive. For the paint mask I first tested a few types of painter’s tape, but these didn’t stick at all. Builders tape gripped slightly better, actually staying attached without any pressure applied on top.

..and sliced, ready to receive paint.

Once installed, the mat gave excellent contact BUT very shortly after, also started making unwanted random contacts. Quick check on the contact surface and indeed, the paint was already flaking off here and there: 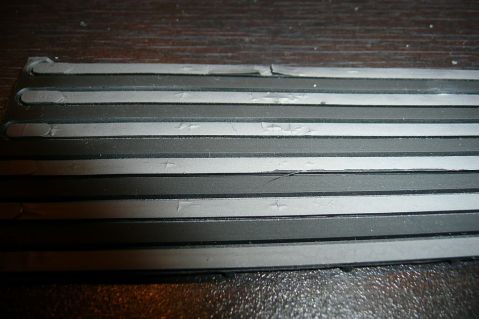 After a thorough cleanup I went for aluminium tape. This was applied in a similar fashion as the (orange) builders tape: One wide piece over the length of the mat and cut to strips using the mat as a guide. Whatever unevenness remained on the surface after this got smoothed flat with a fingernail. Excellent contact once again, but as the aluminium is more thicker than the spray there were some permanent contacts right off the bat. The gap between the PCB and the mat is just too narrow for this stuff. 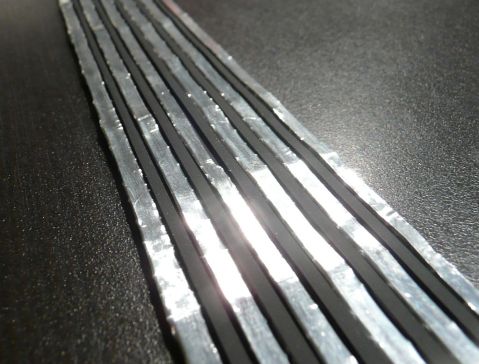 Shiny and conductive, but far from usable.

The conductive strips measure about 13 to 17kΩ end-to-end on my DG-20; with the graphite spray this went down to 200Ω whereas the aluminium tape gave pretty much a clean zero. So to say, certainly usable methods if the adherence could be improved. Not that this really matters, since the contact issues turned out to be caused by the plasticky glue blobs on the fretboard.

Next up, I should probably try learning how to play this thing! Gotta admit that picking a trancey super saw with this thing is far more “super rock star” than any of the internal sounds,  despite my attempts at playing made me feel more or less like having wooden sticks instead of fingers :D. On anything more “serious”, it’s easy to imagine that the DG-20 should be very neat for controlling something more subdued and in a easy tempo, like long ambient-ish pads and drones.

Oh and the definite lesson with the repairs on this instrument: don’t try fixing stuff if you have no idea what you’re doing ;)

One response to “Casio DG-20, fretboard”