Heh, just a little over month gone by, since I announced the hardware of my MAME project complete and I already find myself working on it again. But.. as it happens, I managed to get my hands on a Core2Duo PC (E6320 CPU @ 1.86GHz) for next to nothing. Decent performance upgrade and possibly the end of motherboard-related-video-problems?? Sure, sign me up!

The PC I got is a Fujitsu Esprimo 5916 and summing up its specs, well.. Most importantly, the mobo has a serial port! Never thought I’d say this, but it’s actually a much needed legacy feature, as the spinner I have is built around a serial mouse. Little less upgrades this way, perhaps :).

According to GeekBench, the E6320 outperforms AMD’s 2.2GHz Athlon64 +3500 (what I have in the current setup) with 562 points (2132 vs. 1570). So, I’m definitely curious to see how well this translates to actual emulation speed. Despite MAME supports running emulation in two threads (audio and CPU emulation split separately), it could still turn out that two cores can’t make up for the lower clock speed. But this remains to be tested for..  Just to put things in perspective with the GeekBench test, on it a Power Mac G5 running @ 1.6GHz gets 1000 points.

So yeah, I can has hardwarez, let’s see how it’ll fit inside the cabinet.. Popping open the Esprimo case, I noticed a extra, non-ATX standard, cable running from the PSU to the mobo. No idea what is it for (no operating voltages present, at least), so I’m left hoping that we’re talking about some non-critical system monitoring type of thing. The PSU is a 230W one and should things come down to upgrading/replacing it, any non-standard hardware might take me way deeper into world of shit than I’d probably like.. With custom hardware like this, it’s just way too easy to imagine that if replaced with a standard ATX PSU, the mobo could simply decide “fuck off, not going to do shit with this cable missing”. Despite there is some room to work with (E6320 draws up to 65W), even a couple of harddrives and a decent graphics card could end up topping the supply. Clearly, this setup was designed not to be expanded much.

Funny as it is, the extra power cable captivated my attention so deeply, that I didn’t stop to think that the whole case/mobo design is built mirrored compared against the ATX spec! Just look at the picture below and you get the idea.. So, there I was, happy with the bare mobo in my hands and about to install it on the shelve inside the MAME cabinet, and only then it hit me. Umm yeah, time to come up with plan B. 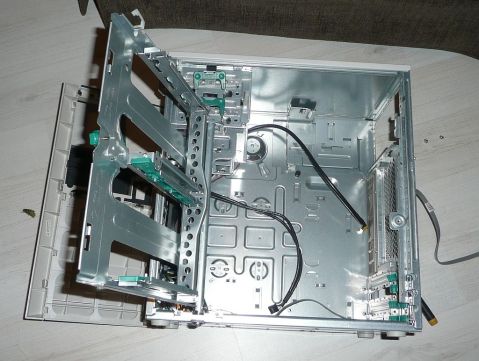 What a fine case with a neat drive door and everything.. except everything is mirrored!

The little luck I have with me, it looks like the case will fit inside the cabinet with a bit of trimming. This also mandatory for losing a bit of excess weight: Since the cabinet already packs plenty as-is, there’s no need to add to it with pointless bits of mechanic. Whip out the drill, and somewhat five minutes  (and 60 or so drilled assembly rivets) later I had the “bare essentials”..: 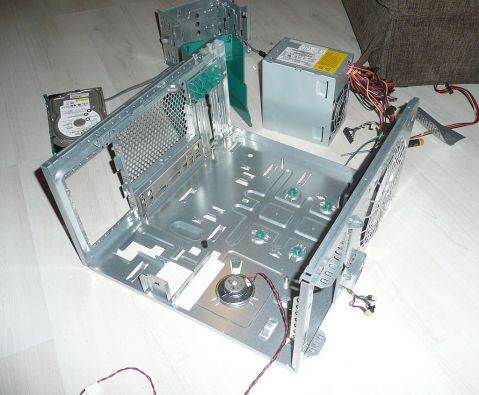 Should work like this, but I’m already thinking of cutting away some pointless bits on the rear and front edges. Depends a bit on the final hardware combination, really. But first things first, gotta have a functional test setup and bla bla.

With regard to TV-Out quality, despite ATI has proved worse than Nvidia a multitude of times, I want to give the former one final chance. Got a spare Radeon HD2600 on my hands at the moment, so yeah what the heck.. This should be decent enough for evaluating the current PSU too, as I recall reading somewhere that the RV630 chip draws around +50W on average. If this proves out a impossible combination PSU-wise, the Geforce 7500LE I have in the current cabinet hardware, should at least work just fine with its +23W (full load) consumption.

Test setup it is then, yay \o/. Even ‘open’ on the floor like this, the system runs (idle) relatively silent after the power-on fan spin-ups. If these noise levels hold well in actual use too, it’ll be dead silent system once inside the cabinet. Definitely need to test how it’ll start to sound once heavier operating load is applied. But first, the basic system setup..