After spending quite a bit of time testing the HxC with Mirage I can state that saving, formatting and loading all work as they would with ordinary floppies! If you start from a “clean slate” by dumping your existing set of floppies, no problem. Just do the conversion chores like I described earlier and you’re running Mirage from a SD card in no time! However, if you have any disk dumps created with the variety of existing Mirage utilities, be prepared to spend a fair amount of time getting frustrated trying to find a working combination of tools. I’ll save my experiences on the latter to the end of this post, since they don’t really relate to HxC functionality in any way.

During my testing sessions, I’ve been using Mirage Ed for sending samples over MIDI. This was the only app which had both parameter editing AND sample transfer that worked reliably. Too bad that I find the parameter editing and UI pretty annoying otherwise ;).. Mirage Sample Dumper and Mirage Edit worked sort of half way there, crashing more than often. The latter also managed to crash Mirage whilst transferring a sample!

To complicate the testing sessions, my Mirage seems to have some kind of issues with the floppy drive controller or it’s cabling too. During a few occasions, the Mirage just refused to boot from the HxC altogether. Leaving the system to ‘warm up’ didn’t seem to affect the situation. I don’t yet know what’s up exactly; the HxC behaves as if the Mirage is accessing it (‘RA’ blinking on HxC), but nothing happens. Disk tracks are not stepped, ‘nd’ is constantly blinking on Mirage display. During some sessions everything worked like a charm straight from the first boot. During one session, the floppy died up in a similar fashion after a couple of hours (‘nd’ blinking on Mirage).. Anyway, I’ll just have to try analyzing the fault at some point, definitely sounds like a connection issue (f.ex. bad solder joints).. Maybe doing a bit of preventive maintenance (like replacing the PSU capacitors) while at it might not be a bad idea.

Anyway.. When the hardware was working, it was enough for me to complete testing and assure myself that HxC is indeed a fully-fledged floppy replacement. I didn’t f.ex. have a blank disk image, so I made one simply by booting the Mirage with FMT-1 and then formatting a couple of existing dumps on the SD.. FMT-1 included :). Later on, I made one of these a “blank template” that I can duplicate as new blanks.

The latest version of HxC software (1.5.2.1) even has a floppy dumping feature, but I never got this to work “all the way”. The OS seems to be on the dumped image (Mirage boots), but the sounds stored on the original floppy are not loadable (Mirage blinks ‘nd’ after loading OS). A damaged dump, so to say. 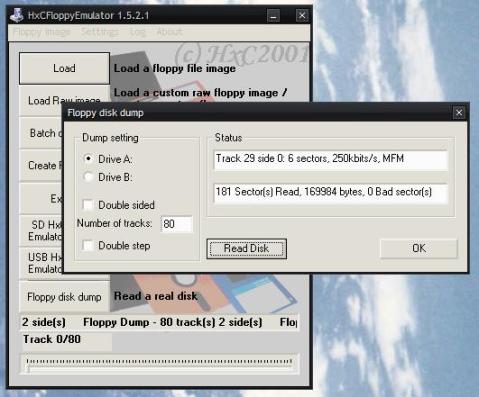 HxC floppy dump in progress.. If only it'd work for Mirage floppies :)

Returning to the disk images.. I’m still very much in the process of testing how existing dumps made with mdisk (or even Ensoniq Disk Manager!) could be converted, if at all. I even spent a while pondering whether dumps could be simply edited to match the format OmniFlop creates (.img) by copy/pasting hex from a working dump. Safe to say, the Mirage disk format makes this a tedious task to perform by hand. Some kind of a script might work, but I have no idea how to make one. To illustrate how OS is located on a Mirage disk, here’s a sector map from  Dick Lord’s Mirage Monitor Disk user manual:

Out of the “external” dumps that I have (the collection available here), I’ve so far only managed converting a few of the Ensoniq Disk Manager images. With these, I’ve first written a .edm to disk on a MS-DOS system using Ensoniq Disk Extractor and then reading the resulting floppy using OmniFlop. Not the most convenient method by any measure for sure! Furthermore, on these images the OS is damaged (‘nd’ blinking). The sounds are loadable once Mirage has been booted with a proper OS.

If you have a disk dump that you know 100% sure to have been made with one of these programs, I’d appreciate a copy of each of these formats for testing. Despite the HxC _should_ support loading .edm, I haven’t gotten any of the real dumps (presumingly made with the actual EDM program) to work simply by renaming the file. It’s only the OmniFlop standard images (*.img) that do seem to work like I described on my earlier post.

For now, this is about as much (and if not even way more) testing / studying that I wish to do on this topic. The HxC works and that’s what matters! :)