Ever heard of Ensoniq Mirage? In case you haven’t, it’s a 8-bit sampler from mid 1980s and when introduced, it was the first sampling keyboard to break the 2000$ price barrier. Before Mirage, you either bought a car or a sampler ;). Needless to say, the price point made this sampler very popular at the time.

I’ll switch to story mode for a few paragraphs, as I seem to be in the mood for bla-bla :). If you want to read about the actual build project scroll down until you see photos. Other than that, read on..

My story with Mirage began around the turn of the century. Whilst shopping for a rack compressor, one of the shops I went to had a cheap second-hand Mirage DSK up for sale. It was the plain keyboard only with no disks or no manuals, and the price was somewhat attractive at a glance.

As I had had the chance to play around with Ensoniq EPS+16 for some years at a friend, I was of course curious about this very reasonably priced Ensoniq. In my opinion, EPS+16 is one of the few samplers with character (I just love the wah+dist fx combos & x-pos offset mod). Not that I was at all familiar with Mirage per se, but given my experiences with EPS+16 and knowing both had the Bob Yannes touch made it interesting. If I had been, I would’ve probably considered a while longer.

You see the Mirage, being very much a computer with a piano keyboard, needs a operating system to boot. No OS floppy disk and the only thing you can do with it is to admire the ‘nd’ letters blinking on the segment display. Thus buying one without any disks..

Anyway, since the shopkeeper mentioned vaguely that disks / supplies are available “from official retailers” and offered additional discount alongside the compressor, I thought “ok disks, no problem” and took the Mirage home. And oh boy, was I wrong with my assumption. The shopkeeper was vague for a reason.

Finding the software proved a lot more difficult, partially because yours truly hadn’t yet learned to default into looking stuff up in the net. This was still around the time when internet access wasn’t a daily certainty for me, so at first I simply started mapping local / national options via the traditional routes.

Eventually, I progressed to internet searches and then the situation became clear. The “official retailers” mentioned were actually a single shop in the U.S.! In the end, with all the costs added up, I ended up paying probably twice as much for a handful of floppies and a photocopied manual than what I paid for the Mirage.

..Too bad that it wasn’t probably more than a year until the floppy drive itself started acting up, gradually drifting towards a more defunct state. Cleanup attempts (common fault, this) didn’t help, the drive was just getting pickier with what it wanted to boot. Eventually, it refused to load disks altogether. And here’s where we start heading towards the topic of this post (finally :)..

After about four years of searching for floppy drive replacements, test modding various DD drives and trying to ask people to help with software for building a CF/SD-card reader (hardware is more my cup of tea, remember?), some two months ago I stumbled across the HxC floppy drive emulator. This comes in two models, the USB and the SD-card ones. The former is read-only whereas the latter can do both read/write.

I couldn’t find any info whether anyone had actually tested HxC on the Mirage, safe to say it was on the official compatibility list. The only problem was that the floppy image converter app which is used with the HxC hardware, understands only Ensoniq Disk Manager (.EDM) disk images. Despite this program is still available from Giebler Enterprises, I felt very reluctant to buy it just for this purpose as I don’t have a huge library of disks.

After a bit of pondering, I decided to bite the bullet and order the HxC for testing anyway. If I wasn’t able to figure out a way to convert the floppy dumps to .EDM (say, editing floppy image headers) then I’d at least have a floppy solution for my Amiga 500.

So the day arrives, HxC in the mail. Installation, no problem. Software, after a bit of testing, no problem! As it turned out, mdisk images (sort of a ‘standard’ program Mirage users use for dumping disks) don’t work but ones created with OmniFlop do after they’re renamed to .edm. 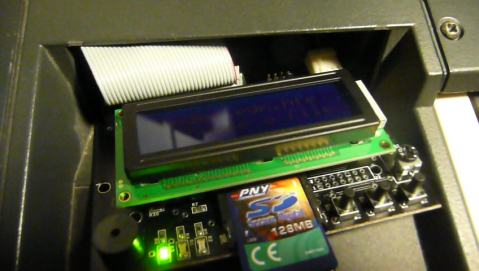 My initial HxC test setup. Video of it in action at the end of this post.

All in all, the conversion / usage process for disk images with HxC goes like this:

So not exactly drag and drop, but it works. As the interface was now tested, I could move on to cleaning up the installation. The power connector on the HxC is not fully mating compatible with what is used in computer power supplies, so I decided to replace that first. 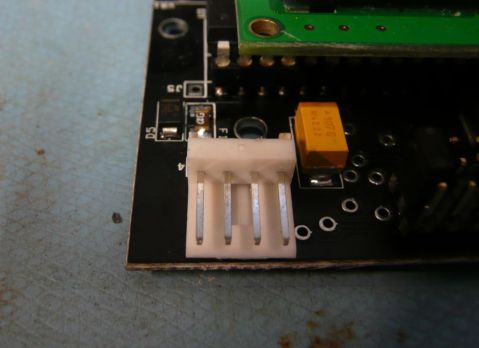 As for installing HxC inside Mirage, I chose to take the “reversible modding” route once again. With this approach, there’s really only one way of installation without putting it inside a separate floppy drive enclosure. That is, the HxC is mounted upside down under the top side of the floppy drive opening.

This requires that the operating switches are replaced with angled ones. As I didn’t have any of these at hand, I modified the original switches. These are not as rigid as real angled switches would be, but you just need to remember not to use excess force with the modified ones.

I decided to machine a front plate for the HxC as well, and to save myself from re-fitting the LEDs I chose to use clear acrylic. 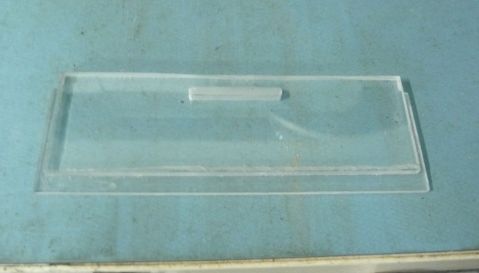 For affixing the PCB, I hotglued small stand-offs to the case. Their locations were roughly estimated by test installing the PCB with the SD-card inserted.. 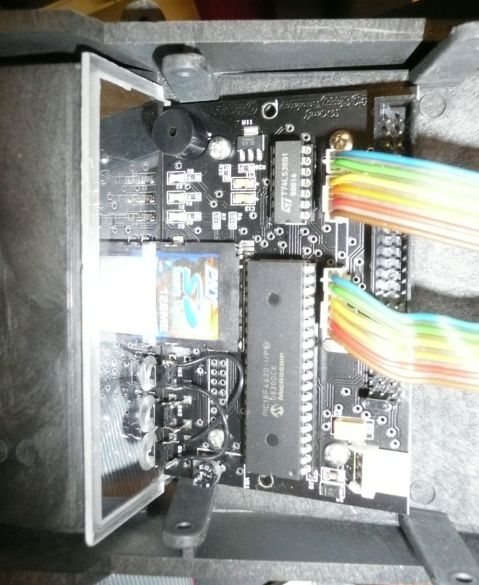 Test fitting the HxC, display is removed so the modified switches are better visible here.

It’s worthwhile noting that left / right switches need to be swapped. The proper way to do this would be to modify the firmware, but I chose the hardware kludge approach :).

Installing the display proved trickier, the display area is fully visible only if it’s installed at a small angle. As I couldn’t figure out any kind of a solid support for this, I decided to fasten it with a few bits of mylar tape. Seemingly solid enough for home use, but I wouldn’t bet for it to withstand continued gigging use. 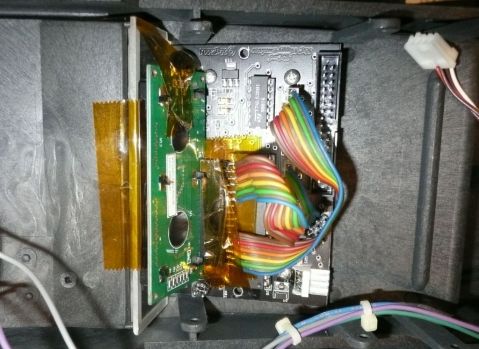 Display installed with bits of mylar tape.. how professional! :) 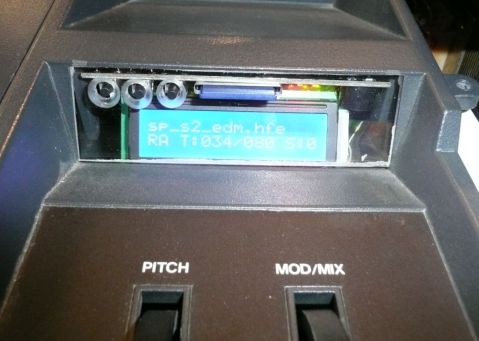 ..and this is what the completed installation looks from the outside.

The shafts on the original switches are a bit too short for this type of installation, but by making the surface of each through-hole concave (using a countersunk drill bit) the buttons are somewhat usable.. To wrap up this post, here’s a clip of my HxC modded Mirage in action.

Come to think of it, I sometimes wonder if there are some floppy disk elves stealing the floppies (3. Profit).. After following the Mirage mailing list @ Yahoogroups for several years, someone joining the list asking for floppies (after having bought a plain Mirage) seems a frequently repeating event.. I WANT TO BELIEVE!!1 :D

A detailed in-depth follow-up about the “software end” of HxC and Mirage is most likely to follow some time later.. If anyone is interested in swapping floppy images for the Mirage, do send me a PM :)

20 responses to “HxC for Ensoniq Mirage”