The negative power supply rail dropout that I experienced whilst repairing board B of my Arp Odyssey back in 2008 decided to become a permanent annoyance some months ago. When finally having the time for repairs, I decided to do the upgrade I had been pondering on during the 2008 repairs. So, 7×15 series regulators it is then!

I decided to use the original PSU board and modify it to fit the new regulators by removing or disconnecting old parts whichever appropriate. Switching to 7×15 regulators actually makes the circuit much more simple, besides these only bypass capacitors (100nF on both input and output) need to be added. For these, I decided to use ceramic SMD capacitors (10% 50V) as they fit neatly between foils on the solder side. To match the original pinout on the board, the positive rail regulator (7815) had to be installed back side up.

7815 regulator installed back side up. 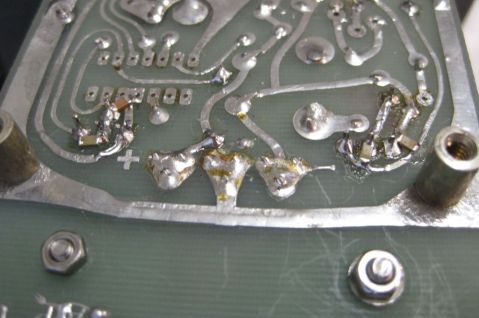 My approach with removing parts not needed should be visible from the following picture :)

Heatsinks for the 7x15 regulators.

Whilst at it, I decided to make the PSU board detachable by adding connectors in-between both the power switch and the power socket. Both use the same type of connector, but the mating polarity is different to avoid mixing up connectors. I also replaced the fuse with a regular socketed one. 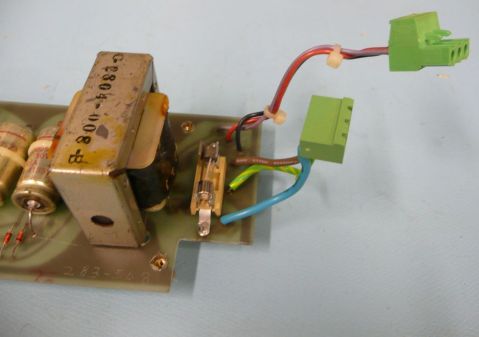 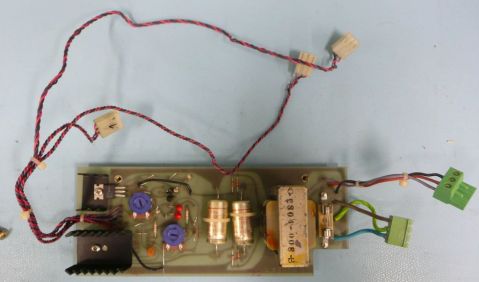 And there it is! The next time the PSU blows up, maybe I’ll test making a switch-mode version :). On the modded PSU, the new negative rail regulator (7915) gives out around -14,8V but at least at a glance, this doesn’t seem to affect the tuning or such.

Best thing is of course, that fixing the PSU revealed more faults. Apparently, the power supply failure has damaged the VCF circuit (osc mixer output at VCF input, nothing on its output) so the Odyssey gets to spend yet more time on the “lab bench”. I also managed to break one of the sliders, its lever snapped off when I moved the synth uncautiously. Yay.