Yes, this post is all about something as trivial as a volume dial! Doesn’t really seem like the most important thing in the overall build, but once I got to this point it definitely grew to be one of those small details that define the project :).. I’ve had this idea brewing for quite a long time and as I finally managed to gather a combination of recycled parts that work together, I think the volume dial is well worth a separate post.

So yeah.. To start with, there’s a coin slot in the front panel minus all the coin mech AND the cabinet is not going to be coin-operated (read: a useless opening in the front panel). I _was_ planning to fill/cover this up about around when I got the loudspeakers installed. As these are a former computer desktop speaker set, they also have a volume dial for controlling the loudness. Sure, would be kinda fun to have that the volume easily adjustable from the outside.. But where to install the dial..

Let’s install a coin to the slot and use this as the volume dial!!!111

After this “revelation” I spent quite a few moments familiarizing myself with the coins of the world, looking for whatever large diameter coins are still in use / production. You see, the coin slot has a relatively high mounting base with threaded M4 screw holes (supposedly for affixing a rail for the coin to slide in). I wanted to keep the threaded holes but the height of the base simply makes it difficult to align a small coin to a potentiometer axle so that coin would actually stick out on the front side.  Trimming away the entire mounting base was never an option.

Eventually, after many twists and turns with my coin-hunt, I settled for a two pound coin which has a diameter of 28,4mm. I was also considering a half dollar coin (30,61mm diameter), but this proved difficult to source. Banks and exchange offices, they like notes only as far as foreign currency is concerned.. The two pound coin I picked up simply whilst on a holiday in England, how convenient is that!

Anyway.. With the potentiometer, it was once again a binned hi-fi amplifier to the rescue. Originally, I was thinking of mounting a potentiometer directly by making some sort of a bracket myself. But, as I came across this geared dial whilst stripping a hi-fi amp for parts, I decided to go with it instead. The gearing makes volume adjustments more accurate. And it looks techier too! Manly mechanics and all that (: 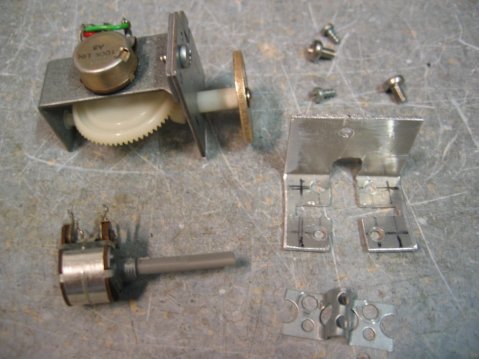 Parts for the volume dial assembly. The dial gears with coin installed, a stereo potentiometer and the parts for mounting everything together.

In order to attach the coin to the gear axle, I had to drill the queen in the head. Lucky enough for me, she didn’t seem to mind.. Sorry anyways! A small groove had to be machined to the coin slot mounting base for the axle, without this there wouldn’t be much of the coin visible.

Coin slot machined for the potentiometer

And to attach the gear part, I made a custom double L-bracket from 1mm aluminium. Then, a bit of assembly and..:

..it works! By touch, the dial is a bit stiff making it hard to detect when you have reached either end of the dial. Once you do, the gear starts skipping and emits a rattling noise. Limit indicator, for sure :). I’ll leave images of the front plate until it’s complete.