Condenser mic on the cheap

Tommi (the friend of mine whom you might remember from the kick scooter post) was playing around with some condenser microphone circuit designs some time ago; among those he had one really quick-to-implement design, so I was of course compelled to try that one out in my own recycle-ish style. Just so as it happens, the device I used as an example on my battery leakage cleaning post had also a small (and working) condenser microphone element in it. I also have some broken microphones put aside for whatever future projects (like casings for projects like this), so what was eventually needed from the shop to complete this project were just a few diodes for the phantom power circuit. Lucky for me, Tommi had some extras.

Prior to fully assembling the mic, I decided to test the circuit by soldering it together directly to the XLR-connector..:

As it turned out a rather compact circuit, I chose to skip rebuilding it to a separate board. So, just replace the component feet connecting the mic capsule to the electronics with a twisted pair extension cable and improvise a shock-mount for the capsule and it’s done. First up though, the most important thing! 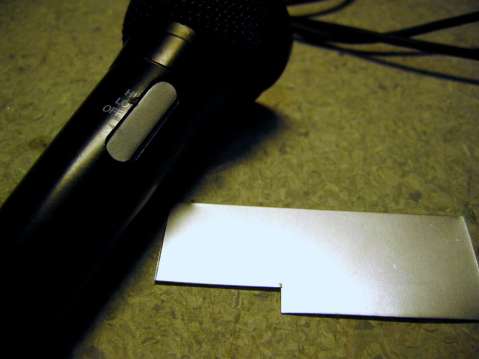 The microphone case I chose had a hole for a on/off switch on it, so I covered that up with a piece of My-Favourite-Aluminium™. For the shock mount (and after quite a bit of experimenting), I ended up with two rubber bands and a bag twist tie.

Not really much to look at as-is! Here’s what it looks when installed:

I added small cuts to the case for the rubber bands, the bag tie is used to secure / clamp them down. The sorry excuse of a windshield used in the original microphone was so dirty, that I decided to cut a replacement for it.

The new one is on the right

And finally, I installed the capsule with the extension cord. Whilst shock-testing the mount, the other rubberband came slightly loose tilting the capsule. A bit of tightening on the bag tie plus some bits of tape and the mount seemed to withstand regular-ish use. Fine enough for me.

And there it is then, the 1€ condenser mic! I assume that after some years, the rubber bands will dry/stiff up and break so the mic will need repairs at that point. Soundwise, the mic is pretty harsh and trebleish even on close proximity. Not sure whether it is good for any instruments, but let’s see.. Need to do a bit of testing ;)

More about microphones on Wikipedia. Schematic of the phantom power circuit used in this project to follow..

2 responses to “Condenser mic on the cheap”